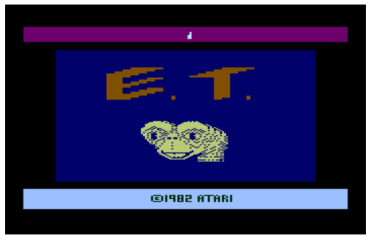 E.T. the Extra-Terrestrial (also referred to simply as E.T.) is a 1982 adventure video game developed and published by Atari, Inc. for the Atari 2600 video game console. It is based on the film of the same name, and was designed by Howard Scott Warshaw. The objective of the game is to guide the eponymous character through various screens to collect three pieces of an interplanetary telephone that will allow him to contact his home planet. Warshaw intended the game to be an innovative adaptation of the film, and Atari thought it would achieve high sales figures based on its connection with the film, which was extremely popular throughout the world. Negotiations to secure the rights to make the game ended in late July 1982, giving Warshaw only five and a half weeks to develop the game in time for the 1982 Christmas season. The result is often cited as one of the worst video games released and was one of the biggest commercial failures in video gaming history. The game's commercial failure and resulting effects on Atari are frequently cited as a contributing factor to the video game industry crash of 1983.

Click on the E.T. Screenshot to run an in-browser emulation of the program.

Read the instruction manual, deal with some of the frustrating bugs and you can beat the game. I could when I was 8 years old and I'm certainly no genius.
Reviewer: Dominicmgm - favoritefavoritefavorite - August 11, 2017
Subject: Apart from the hole, it's just your average Atari game.
There are dozens of worse games out there, such as Plumbers Don't Wear Ties. I don't get why they had to bury it in New Mexico. They could just make a fixed version.
Reviewer: jean_luc_turbo - favorite - July 16, 2015
Subject: The game that had to be buried in New Mexico
Seriously: